This Month In The Civil War-Dec. 1862 By Sandy McBride 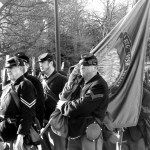 As the cold days of December, 1862 descended on Virginia, the Federal Army of the Potomac, under its new commander General Ambrose Burnside, was massed on the hills around the town of Falmouth.  Their objective was Richmond, the capital of the rebellious southern states, some fifty miles to the south.  In their path, however, were the rain-swollen Rappahannock River and the city of Fredericksburg.  Adding to the danger to troops attempting a crossing was a half mile of wide-open ground between the river and the town.

Urged by President Abraham Lincoln to move with haste, Burnside had moved the bulk of his officers, men, horses, wagons and artillery 40 miles in just two days.  But his inability to get them across the river in a timely manner had cost him dearly.  While Union troops waited on the north side of the river for the arrival of pontoons on which to build bridges to move men and arms across, 40,000 Confederate soldiers under General James Longstreet had moved in and taken up a strong defensive position along Marye’s Heights behind Fredericksburg on a four-mile stretch of high ground.

To read more login to The Weekly Paper