In front of a formation of India Company Marines and sailors stood a battlefield cross, which consisted of an upside down rifle with a bayonet, a Kevlar helmet, a pair of boots and identification tags, all assembled to honor their fallen brother who died while conducting combat operations in Marjah, Afghanistan, Dec. 2.

“(Denier) will be missed, but surely never forgotten because we will at all times hold him, as well as his family, in our hearts,” said Lt. Col. Carl Cooper Jr., commanding officer, 3rd Battalion, 9th Marines.

Denier’s company commander, platoon sergeant and his peers reflected on their time spent with the India Company rifleman from Mechanicville, N.Y.

“He left us as he lived, protecting who he loved and putting their welfare before his own,” said Capt. James M. Geiger Jr., commanding officer, India Company. “I’m incredibly proud to have served with Lance Cpl. Denier, and I thank him for his courage and commitment to his brothers. To his family, we vow to always honor his memory and to always be there for you as members of our Marine family.”

“There is no doubt that Anthony’s actions that day saved the lives of many Marines to his left and his right,” said Murphy. “I witnessed young men, in their prime, sacrificing everything for each other and with each other. I witnessed courage like this time and time again throughout the firefight. I am very proud of Anthony and his actions, for I know it is because of his sacrifice that the rest of us came home.”

Denier’s team leader, Lance Cpl. Robert Johnson, talked about his experiences and told stories about Denier and some of the things he will remember about him.

“I always knew I could ask him for advice,” said Johnson. “Being older than us, Denier had a lot of advice about life. I’m honored to have known such a great guy in my life and even more honored to have served beside him.”

Near the end of the ceremony, gunfire interrupted the silence, as the firing detail performed a three-volley salute to honor the fallen Marine. 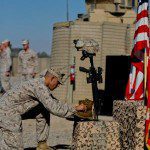 After the service, Marines and sailors approached the battlefield cross, saying goodbye and rendering a salute as they remembered Denier’s life.