Nathan Hatalsky – Named Athlete of The Year By Sandy McBride 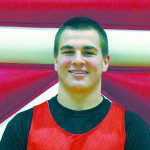 Nathan Hatalsky is pretty sure he was tossing a football around before he could walk, and it’s a safe bet that he learned how to tackle taking down his older brother, Chris.  Flag football was too tame for him, but he really got into the sport when he was old enough to play for the local Junior Red Raider program.  Nate loves the game of football.

The Albany Times Union named him as their small schools Defensive Athlete of the Year and The Saratogian has also named him Athlete of the Year for his outstanding accomplishments in his senior football season. To receive these two prestigious honors is the crowning achievement in Nate’s four-year varsity football career at Mechanicville High School.  Nate was honored for his prowess on the gridiron where in his senior year he logged 72 solo tackles and 64 assisted tackles as well as several quarterback sacks in leading his Red Raider team to a 6 – 3 overall record.

To read more login to The Weekly Paper