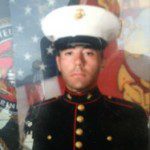 Mechanicville native Lance Corporal Anthony J Denier was killed Sunday while on foot patrol in the Marjeh district of Afghanistan. He had joined the marines nearly two years ago. He called his mother every Sunday. This past Sunday she was waiting for his phone call . Instead 2 Marines in full dress uniform appeared at her door to deliver the sad news. He will be buried at the Gerald Solomon National Cemetery next week.

Corporal Denier's mother related that Anthony had always wanted to be a Marine. He had to overcome all the obstacles to be a Marine and he overcame them. He felt very strongly that the need to protect his country, family and our freedoms. At the time of his death he "was doing what he wanted to do. For all of us " Mrs. Morgan said.

Anthony's mother wants everyone to know how supportive the Marine Corps have been. They have helped with all of the details that must be attended to. "They stand by a Marine's family."

Tom Salvadore and the United States Marine Corps will take care of funeral arrangements. American Legioin Post 91 in Mechanicville will hold a service for Anthony. He will be buried with full military honors at the Geral Solomon National Cemetery.

He had been in Afghanistan only since October 26th.

Mrs. Morgan wants everyone to know how very proud his family is of Anthony.

Besides his mother he is survived by sisters Maria Betts and Amy Denier.